This is known as the resonant frequency (fr) and at this point the circuit is known as a tuned circuit for the given frequency.

The resonant frequency of a tuned circuit (series or parallel) is given by the following formula:

The resonant frequency of a circuit containing an inductor of25nH and a capacitor of 50pF is:

The circuit below shows a series LC circuit.

Note that we have included resistance as there is no such thing as a perfect inductor or perfect capacitor. There will always be some resistance present in the windings of the inductor and there will be losses in the dielectric of the capacitor.

If the XL and XC are in series, at resonance the XL and XC are equal in magnitude and opposite in phase and therefore cancel each other leaving the circuit as purely resistive. If the supply frequency is moved away from the resonant frequency the impedance increases and the current falls.

Resonance Curve for a Series Circuit 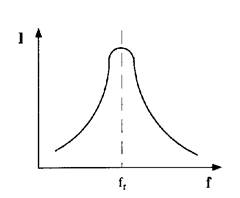 The impedance Z of a series LC circuit at resonance will be equal to the value of resistance present and the current flowing through the circuit will be at a maximum value.

In summary for a series LC circuit at resonance

I is at a maximum 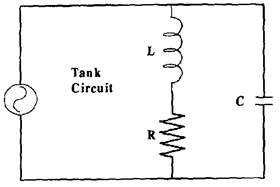 In a parallel circuit at the resonant frequency XC  = XL but in this case although the reactance is equal they do not cancel each other out. It is the currents in each branch that are out of phase and cancel each other.

Resonance curve for a parallel Circuit 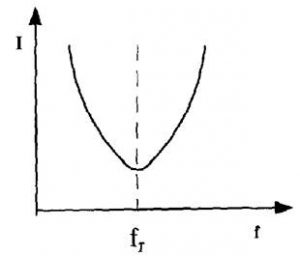 At resonance in a parallel circuit the impedance is at maximum, in theory it is infinity, however as there is always some resistance in the inductor it will only be a very high figure.

In summary, for a parallel tuned circuit at resonance

The Quality Factor (Q) of a component or circuit is a number calculated from the ratio of energy stored to the energy lost.

NOTE:  In this formulae X does NOT indicate a net reactance (as that will be zero in all resonant circuits) but can use either XC or XL which will be equal at resonance. 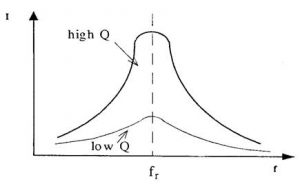 Because the Q of a circuit depends on the amount of reactance the Q figure can be controlled by the values of components used in the circuit.

If the reactive components are replaced with a 120pF capacitor and a 1μH inductor the resonant frequency is still 14∙5MHz but the reactance is now 91∙1Ω and the Q has changed to 9∙1.

If the capacitor value were reduced (30pF) thereby requiring an increase in inductance (4μH) for the same resonant frequency (14.5MHz) the reactance is now 364∙4Ω giving a Q of 36∙44.

It is important to recognize where a filter is considered to have significant attenuation, that is to say where on its response curve the signal is diminished enough to ignore.  On power curves this is accepted to be at −3dB or where the incoming signal is reduced to half power and for this reason they are also known as half power points.  Beyond this point the signal diminishes rapidly. 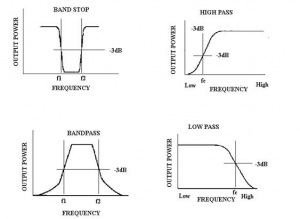 It is also important to realise that the half power points combine with the Q of a circuit to determine its bandwidth. 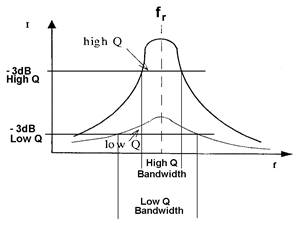 A resonant parallel tuned circuit is also known as a Tank Circuit.

With perfect components this would keep on for ever, but the inductor and wiring will always have some resistance and the capacitor has some dielectric losses, so the energy gradually diminishes unless it is topped up from an external source.

If the oscillation is only required for a short period a resistor may be inserted into the circuit at such a value as to intentionally damp the oscillation at a given rate.  This resistor is known as a ‘damping resistor’.

The equivalent circuit of a crystal is a combination series parallel tuned circuit. 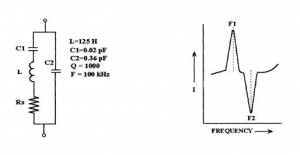 With a frequency of 100kHz the series side of the combination is at series resonance and therefore has a minimum impedance depending upon the value of the circuit resistance (RS). So at this frequency there is maximum current flow through the series circuit.

At about 103.5kHz the net reactance (XL – XC)  on the series side will equal the reactance on C2, giving a parallel resonant circuit which will have maximum impedance therefore minimum current flow.

It is impossible to actually construct an equivalent circuit to a crystal as an inductor of the size required would have very large losses.

Impedance is minimum, current is maximum, phase angle is 0°, and power factor is unity.

The quality-factor of RLC series circuit at resonance condition,

Voltage magnification factor is calculated at different levels of supply voltage, and it’s shown in Table 3. The series RLC circuit is at resonance, the magnitudes of voltages can become larger than the supply voltage and it is displayed in Figure 4.

By means of the parallel resonant circuit, the current taken from the supply can be magnified. This type of resonance is called current resonance. Quality factor of R-L-C parallel circuit is the current magnification in the circuit at resonance.

When the parallel R-L-C circuit is at resonance, the magnitudes of the current become increasingly based on given supply voltage and it is shown in Figure 5.

Due to the above, all components in a resonant circuit need to have appropriate voltage and current rating above supply voltage.